Sermon for the Feast of the Ascension on the occasion of the dedication of the new Benedictine monastery in Tabgha in the Holy Land on May 17, 2012

“Men of Galilee, why are you standing there looking at the sky? This Jesus who has been taken up from you into heaven will return in the same way as you have seen him going into heaven” (Acts 1:11). And at the end of the Gospel for today's feast we hear: “But they went forth and preached everywhere, while the Lord worked with them and confirmed the word through accompanying signs” (Mark 16:20).
It is not the vocation of his disciples to become star-gazers, but to keep the earth within their sights. It is not by accident that the old representations of the Ascension show the feet of the Lord, about to disappear in the clouds of heaven above, but on earth his footprints are visible in the midst of the astonished disciples.
And the Lord says also in another place quite explicitly: “I am with you always, until the end of the age” (Matt 28:20). These footprints of Jesus are normative for monks and nuns, for they are called to be our pacemakers on this path of following Christ. A monastery is no island of the blessed, but it is, as it were, the vanguard on the way out of the multiplicity of human existence into the glorious freedom of the children of God.

It should be said again, the monks must be our pacemakers on the path of following Christ. Therefore a monastery is important not only for the religious family itself, but also for the whole Church. We humans are surrounded on all sides by whole armies of transitory things and finally by death itself. We must ask ourselves constantly: to what extent are we really free and to what extent are we secretly controlled as people who are like puppet figures, whose emotions can be jerked and directed?
It is the Life of Jesus that gives your monastic community in the Holy Land, on the Sea of Genesareth, in Tabgha, its orienation and direction. Christ suffered for us. Thus he left you and us the path to follow. You need now only to walk in his footprints so that they may not be blown away, as in the presentations of the Ascension in the ancient Church. You as monks are the in charge of preserving the traces of Jesus in the world.

Our Lord was no privileged outsider. He himself was a person who was surrounded on all sides. The path that he trod is not unique. It is feasible also for us, because he trod it to the end. And therefore he says to us: “I am the way and the truth and the life” (John 14:6). Holy Scripture gives us the markers for this pathway:

He committed no sin, and no deceit was found in his mouth.” When he was insulted, he returned no insult; when he suffered, he did not threaten; instead, he handed himself over to the one who judges justly. He himself bore our sins in his body upon the cross.
(1 Pet 2:22-24)

Do we dare to follow such a path? You stood before this decision, dear fathers, when you decided to set up a Benedictine monastery here. It is the only way that leads from human servitude into the glorious freedom of the children of God.
Today, on the day of the dedication of your new monastery, you are being asked again, “Do you really want to travel this path?” We will try to reflect on some of the steps that the life of Jesus has marked out for us as the way to freedom.

“He committed no sin.” Sin always means separation. Sin is the way of thinking that is separated from God and mankind, which is always and everywhere offered to us. Jesus never distanced himself from the people who placed themselves in his path, but always first empathized with these people.
This desire to understand the other is the first step from the compulsion of merely reacting to the other to the freedom of right thinking and right action.Whoever understands seems weaker than the other, who is obsessed by the rightness of his position. Whoever wants to understand will often have to think and act against his own interest. But this desire to understand is the only possible way to build bridges over deep divides.

In the Middle Ages there were bridge-fraternities, in which each member was pledged to care for the condition of the bridges, so that the many pilgrims of the Middle Ages could arrive at their destinations. Our Benedictine monastery on the shore of Lake Genesareth should be such a bridge-brotherhood, in which each (monk), through his understanding, builds bridges over deep divides from father to father, from monastery to monastery, from priest to pilgrim, from Christian to Christian.

Another step on the path that shows us the life of Jesus: “In his mouth there was no guile.” In the last hundred years our contemporaries in Germany have had to experience what destructive force cleverly chosen words can have, when somone tries to play on emotions, hopes and fears in order to manipulate people. My private life was characterized by such attempts. I was born in 1933, in the year Hitler came to power. After our expulsion from Silesia, I experienced in Thüringen 40 years of communism in its purest form and even now the uneasy time of our democratic state.

Even today, in dealing with people, it is an almost unshakeable article of belief that words are a means to an end in order to manipulate people. In order to bring people into line, words seem to make every goal seem holy.

Today it is seen as progress that people are persuaded by words instead of being compelled by force. As if a manipulated person is not also a violated person. Christ never manipulated anyone. His words sought to help each individual to recognize the truth so that each one could also speak the truth in his own words and live them out and follow in their traces. Christ set people free that they might follow their own path in search of the Truth, which He Himself is.

And dear Benedictine monks, dear Sisters and Brothers, likewise today the search for truth does not secure us a position in this world. He who seeks truth must repeatedly challenge himself. That includes a willingness to take back one's own words, to revise one's own position. This includes readiness and willingness to change, to revise positions. The search after truth safeguards a community from spiritual rigidity, inflexibility and senility. It keeps a community flexible, versatile, spiritual and young. Whoever seeks after the truth must challenge himself frequently.

Here in the Holy Land we detect everywhere the traces of the passion of Christ. He truly bore our sins with his body upon the cross, so that we might be freed from our guilt and be able live for the truth. That is the most difficult step on this path. In the eyes of all it is the weakest position in the discipleship of Christ.
It is the courage not just to take the blame for something we did not do, but also to bear it and let it end with us, when it was undoubtedly someone else’s fault. We can understand in the light of the gospel that a large part of the lies, hatred and egotism surrounding us cannot be processed unless someone takes it on himself and lets it end with him, so that peace may be gained.
It is incredibly difficult to say yes to this personally. “It must be so,” we say and we think, “but does it have to be me?” And so we play along, hoping it would pass to someone else. And the game goes on for the prize of peace and freedom. It goes against our instinct for self-preservation.

Feier der Klostereinweihung. But this is where the monks come in.

That is not pious romanticism, no, this is the spiritual front line, where also for us is created the possibility of freedom from encirclement by sin and failure in order to enter into the splendid freedom of the children of God. It seems to us impossible that after accepting the guilt of someone else, a quite new freedom, a new self-awareness, a new dignity, an entirely renewed life can appear. It seems impossible and unbelievable. Now it becomes evident who really is our enemy, who surrounds us with servitude without peace. It is in the final analysis death who whispers to us: “What do you want? It makes no sense! There is nothing new behind the walls. Everything will be much worse in the enclosure. Stay with both feet on the ground. Make the best of it! Take the possible and impossible obstacles and turn them into a runway for yourself!”

If Christ had not walked this, his and our way, and indeed to the bitter end and if, out of this misery had not issued forth the resurrection of the dead and found fulfillment in the ascension, then we would have to capitulate to death and its path.
But the risen Christ is the helper pointing the way. He is not only the way and the truth, but also the life as the glance in heavens shows.

In all the activity of following Christ, access to freedom cannot be forced, but only suffered through relinquishing our own, easier ways, in often painful obedience to the truth, in courageous gazing at what surrounds us: whole armies of corruption and death.
There is no other way that leads to our goal. We do not need to look for it like a confused herd, but we may go forward with the word of our helper, who points the way, in our ear calling to us “I am the way, the truth and the life”.
He shows us his way that leads to our destination, as we lift our eyes to heaven but also look for the footprints that Jesus left on earth, and live in expectation of his coming, as we have watched his ascension today. 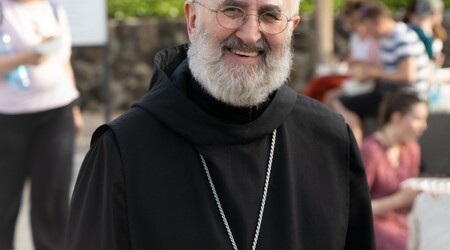 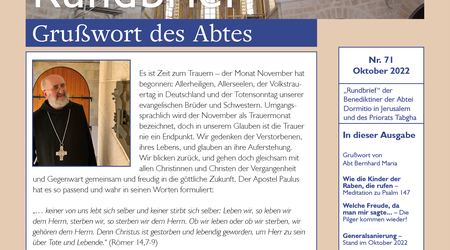 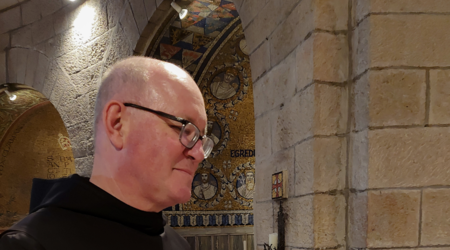 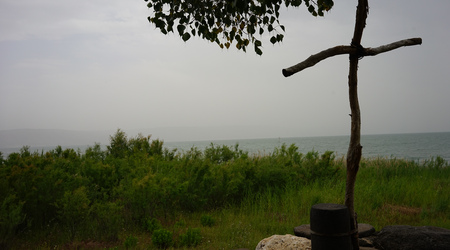 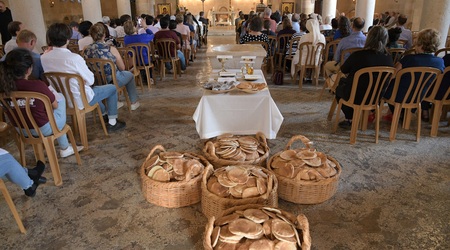 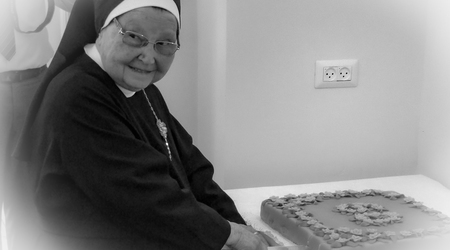 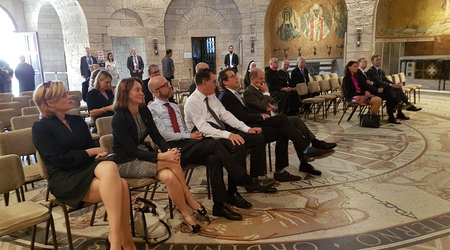