Like a Girl with the Charm of a mature Woman 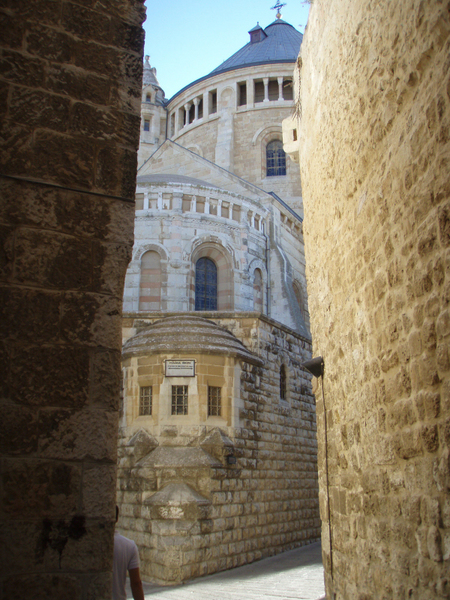 View from a side lane of the Dormition Basilica. Historical truth and scientific certainty are hardly certain in a city formed by so many beliefs and soaked with the blood of so many faithful. All the more important and characteristic then become precisely these beliefs and traditions that are handed on from generation to generation.

That occurs in oral form, sometimes also in written form and in individual cases also in stone. Modern Jerusalem stands on a whole collection of such oral, written and archaeological traditions and beliefs. Much of what one sees and observes at first sight may be young in the context of three thousand years of the city's history. Yet the roots reach deep.

The changing history of the place

Our Dormition Basilica is also relatively young with its barely hundred year history. But it stands on old stone and oral testimonies of Christian belief. When the room of the Last Supper was lost during the destruction of Jerusalem by the Roman troops in 70 A.D., a Jewish-Christian synogogue was built on Mount Zion, later designated as the “Church of the Apostles.” In the fourth century it was enlarged to become a small church. At the beginning of the fifth century a large Byzantine basilica known as “Hagia Sion” was erected in its place. which however, was already destroyed during the Persian invasion of 614. Only in the 12th century was a new church built by the crusaders, larger than all its predecessors and called “Santa Maria in Monte Sion.” However, when the Muslims retook the city from the crusaders in 1187, many traces of the brief Christian period were wiped away. The stone remains of Santa Maria are found today only in the area of the present-day Room of the Last Supper and deep in the ground beneath our monastery and our church.

A the end of the 19th century, when the Germans undertook to acquire the plot of land on Mount Zion, it was still a field of rubble behind which arose the Nebu Daoud (Prophet David) complex.

During the centuries, the local Christians have preserved the memory of two stones that they honored as stones from the house where Mary lived and died. Both these stones have found a place on the ground floor on the outer side of the tower, where even now oriental Christians come to pray.