Group of monks at the grave of Abbot Maurus. With the beginning of the Second World War once again German priests and religious were interned. One part of our brothers were allowed at first to remain in the Abbey, since Prior Joseph Henninger OSB was a Czech. Meanwhile the German Lazarists, who had the care of the shrine of the Multiplication of the Loaves and the farm in Tabgha on the See of Genesareth for the German Association of the Holy Land, had to leave the country. The directors of the Association in Cologne asked the Benedictines of Mount Zion for assistance with non-German monks. Thus began in the autumn of 1939 the story of “Benedictine Tabgha,” which continues to this day.

However, part of the German monks finally had to leave Mount Zion and were interned in various shifting buildings in Jerusalem until 1943. The community, like many others after the end of the Second World War, was busy trying to orient itself in a once again changed world, when in May war broke out between the newly born State of Israel and its Arab neighbors. 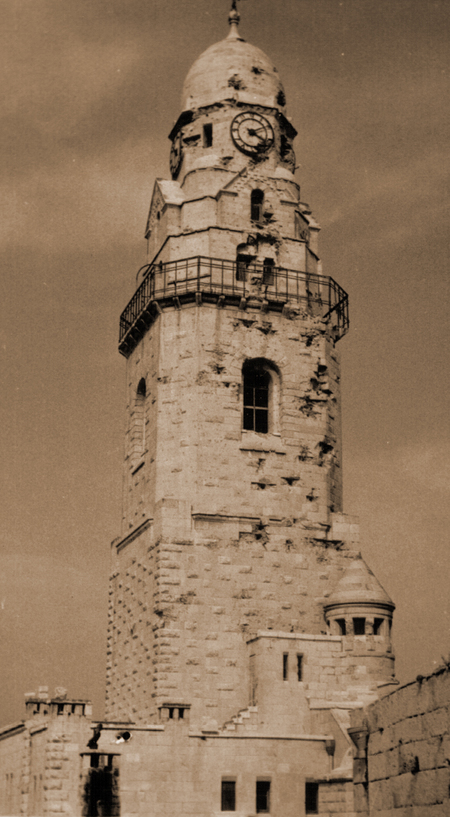 War damaged bell tower . This war had more effects on our monastery than all previous and later wars until today. Not only because the whole community had to leave Mount Zion and was interned until June 1948 in St. Charles (the German Sisters of St. Charles Borromeo), but from now on our Abbey lay at the dividing line between two worlds. Soon already Mount Zion was occupied by the Israelis, while the Jordanian-Arabic side held the Old City. No-man's land and the front lines surrounded Mount Zion with our church and monastery.
Even today the wounds in the stones of our church and the neighboring bell tower testify to how the grandfathers and fathers of those, who for decades seek to conclude peace and yet continue to engage in hostilities, shot at each other here on Mount Zion.
Jerusalem was divided. The bell tower of Dormition stood like a watchman between the Israeli-Jewish west and the predominantly Muslim-Arabic east. It did not really belong to one side or the other.